From Accountant to Author to Create and Live Her Dream 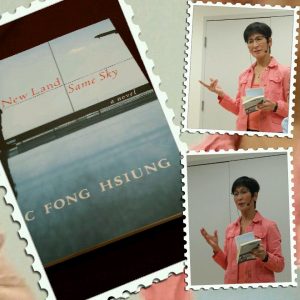 When the soul aches for something more, you can’t deny the gnawing. Every day that you ignore it, it festers like an untreated wound. Then when you can’t bear it anymore, you have to act to alleviate the ache.

That was how I felt in early 2015. I no longer enjoyed working at my job. After twelve years with the same company I couldn’t bear to think of doing the same work for the next few years. How did I get here? I had been Vice President of Accounting several years before that point and had left the position to become Vice President of Business Processes and Systems. The move was supposed to keep me engaged and happy with my job. And yet, I no longer found the work challenging. Sure, there were moments of optimism, but mainly the grind started to get to me.

While professionally my career seemed to be in a rut, on a personal level I was starting to live my dream of becoming a writer. In October 2014 my first novel, Picture Bride, published by TSAR Publications now rebranded Mawenzi House. I had never written a novel before and yet a publisher wanted my book. Not just any publisher. MG Vassanji, a highly respected author and the husband of my publisher Nurjehan Aziz, saw potential in my book. Vassanji of the Giller Prize fame—nominated three times and won it twice—and winner of the Governor General’s Literary award. He wanted to publish my book! Yes, he edited Picture Bride and my second novel, New Land Same Sky. (October 2018).

Making the Decision to Leave

So here I was, 2015 freshly begun and feeling blue about my job, but still on a high about my book’s release. I grappled with these conflicting emotions, wondering what I should do. Look for a new job? Oh wait, I couldn’t do that to my boss…just contemplating the possibility seemed traitorous. Of course, now I realize how ridiculous that notion was.

Still, I very much wanted to have more time to write, and I started thinking about how to make that happen while slowly easing my way out of my job. I took stock of my finances and decided that in three years’ time I could “retire” from my company. There were complications, which I won’t go into regarding the corporate handcuffs that bound me. At the time I felt I had to give the company three years’ notice to remove the handcuffs beneficially and to allow me to work four days a week during my working notice period. So, that was exactly what I did. My boss wasn’t happy about my decision but he respected it and worked out the terms with me.

Folks, that was not good planning.

What I thought was a wonderful idea then, in hindsight now I realize how stupid I was. Although my departure would occur in three years the entire organization became aware of it. Suddenly I was no longer as relevant as I had been, no longer up for any more promotion—not that I was looking for one—, no longer seen as a good investment for anything long term. I became a knowledgeable sage (relic?) helping others and letting them pick my brain for kernels of wisdom, real or perceived. The power to control and effect change slipped from my fingers. I felt like I was sailing a rudderless boat where others made all the decisions. My voice didn’t matter anymore.

Anyone thinking of letting your exit strategy known years in advance should reconsider it. I thought I was being considerate to my boss and doing the right thing by an organization that had mostly been good to me. And despite the lengthy notice and what was supposed to have been an organized departure, things still turned out somewhat chaotic towards the end. It would appear that people generally believe humans perform better under pressure, and so there was a mad scramble to learn and allocate my work when my departure became imminent.

So I left on March 31, 2017, a Friday. The following Monday, I didn’t feel any different. It was like all the Mondays I’d experienced for the past three years when I’d been at home writing. Then Tuesday rolled along…an extension of Monday, I thought. Starting to relish my time off, I wrote feverishly every day. After all, that’s why I quit my job. Until…

Reality check. We were living on reduced income now. My budget was moving along as planned, and we would be fine—at least the reasonable side of my brain said so. Yet every day I worried that we wouldn’t have enough, that we’d have to dip into our capital. But, I was executing my financial plan, which I’d initiated during my younger days, the plan to live off the income generated from our investments - the same plan that had us investing monthly into our Registered Retirement Savings Plans (RRSP), Tax-free Savings Accounts (TFSA), and any other investments that our cash flows allowed. I had read about the benefits of dollar averaging, the powerful effects of compounding interests from monthly (or any other periodic) contributions. So that’s what I had been doing for as long as I could remember.

Why, then, was I worrying?

Right up to the time I quit my job, I had contributed to our savings. Through market highs and market downturns, I had kept going. Now that I was withdrawing from those investments, suddenly niggling seeds of doubt started to creep into my brain. The income seemed paltry compared to what I earned before. I’d be lying if I said I didn’t experience sleepless nights worrying if we’d be fine. Everything we touched needed more money. We were encountering one-time purchases and maintenance costs just as our cash flows were slowing down. Yes, I had a few panicked moments.

Yet throughout all those early months after I quit my job—I refuse to call this phase of my life retirement—I never thought of going back to work.

It was probably about four or five months later when I started to feel like everything would be fine. After a meeting with our financial planner—yes, even accountants need one—my monkey brain quieted. I replaced those stories in my head with vacation plans, and one of those was a short trip to New York City.

We went to NYC in July 2017, and while we were there—of all the unlikely places for this to happen—I suddenly had the urge to deepen my several-years-old meditation practice. As soon as we got home, I signed up for a mindfulness-based stress reduction (MBSR) course online. This set me off in a self-exploratory trajectory. It also made me realize that I wanted to share my practice with others. So later that year, I created a gentle stretching and meditation class—volunteer basis—at my YMCA where I was already leading cycle fit—another volunteer class. After teaching it for a while I thought that the class would be a better fit if I could add yoga to it, but I wasn’t a yoga instructor. Well, that became my motivation for obtaining my certification.

During this past year, I took on a couple of consulting jobs. What I’ve realized is that once you’ve tasted life outside the corporate world, going back is only bearable when you know it’s short-lived and part-time. My heart doesn’t belong there anymore. I like where I am…I am exactly where I should be, even if my writing output isn’t as high as it could be. This happens when you think you’ve got the time to write, and then other things start to creep into your day. Before you know it, all kinds of sideshows and distractions meant to keep you from writing take over the day.

Writing is one of the hardest things I’ve done, but it is one of the most rewarding too. When I spend hours finishing a good writing project I feel a high that is incomparable to anything. It’s a high that’s deep inside, a sense of satisfaction and joy that can only be produced intrinsically. Almost like the feeling I get when I’ve successfully created a challenging Excel file requiring my full concentration, only better. What it boils down to is that both are acts of creation and both culminate in the realization of my vision.

My days are filled with activities most of which I happily do. I am also in my writing groove these days. The present moment is all I have, and I’m content to be here.

To learn more about Fong Hsiung and her books, visit: www.fonghsiung.com